Back to all posts

The Acts of the Apostates - Part I

Of all the many important topics that we could choose to address this time, we felt that we could get some big help from a little book of the Bible. If you go by an English word count, the Book of Jude is the fifth smallest member of the canon of Scripture. Despite its diminutive size it has some far reaching and timely words for us today. That being the case, we will be doing a series on the epistle over the next few newsletters.

Here’s the opening of Jude’s letter…

Jude, a servant of Jesus Christ and brother of James,
To those who are called, beloved in God the Father and kept for Jesus Christ: May mercy, peace, and love be multiplied to you. Beloved, although I was very eager to write to you about our common salvation, I found it necessary to write appealing to you to contend earnestly for the faith that was once for all delivered to the saints. For certain people have crept in unnoticed who long ago were designated for this condemnation, ungodly people, who pervert the grace of our God into sensuality and deny our only Master and Lord, Jesus Christ.

The church age began with the book we know as Acts, or “the Acts of the Apostles.” A few decades later, near the end of the Bible, we find the book which we might call the ‘acts of the apostates’ — Jude.

First off, what is an apostate?

It’s a strange word; a word not commonly used. Truthfully, I didn’t really know its meaning until later in life. Then again, I used to think that the epistles were the apostles wives.

The dictionary defines an apostate as:

"a person who renounces a religious or political belief or principle."

So in Biblical terms Demas and Judas would both be apostates. We all know Judas, but Dumas is perhaps less well known, so here’s Paul’s summary of Demas’ defection. “For Demas, in love with this present world, has deserted me and gone to Thessalonica” (2 Timothy 4:10).

Do a word search on Demas in your Bible and you will see the sketch of an apostate life. In the cases of both Judas and Demas, you see a pattern. In the beginning, you see what appears to be a sincere conversion and walk with the Lord. In the end, you see a denial of what they once professed, and a turning away from the truth. That’s apostasy.

There are those that come into the church and profess a love for Christ and then leave as apostates, but the people that Jude is particularly concerned with are those who stop believing the truth, but remain in the church. As teachers or leaders they may profess to be Christians, but through their skewed and twisted presentation of scripture they exert influence over others and draw them away into error.

So I guess the second question would rightly be, should we be surprised to see them?

Has God lost control somewhere along the line? Was this an oversight or loss of foresight on His part?

Here’s just a few things that our Lord Himself said. 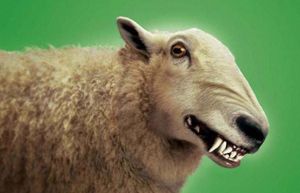 In the Sermon on the Mount, found in Matthew 7:15-23, Jesus tells us to beware of the false prophets, that they will come to us as wolves in sheep’s clothing, that we would know them by their fruits, and that they have the appearance of Christianity but practice lawlessness. Later in the Olivet discourse in Matthew 24:9-28 he stresses that many false prophets will arise and deceive many by great signs and wonders.

God warns us through Paul in Acts 20:29-30 “after my departure savage wolves will come in among you not sparing the flock.” Where does he say they will come from? “From among your own selves men will arise speaking perverse things to draw away the disciples after them.”

He goes on to warn this young pastor Timothy in 1 Timothy 4:1, “now the Spirit expressly says that in later times some will depart from the faith by devoting themselves to deceitful spirits and teachings of demons…”

So, just from those few selections we can clearly see that a sovereign God has foreknown and predicted exactly what would happen. We have no need to feel that He is not in ultimate control, and we surely have no reason to be surprised to see these prophecies come true.

The third question is, what’s the big deal? Why should we be concerned?

Apostates are dangerous because they have enough knowledge of the truth to twist it convincingly and so deceive someone who is not grounded in the Scriptures.

Paul’s whole purpose in writing the epistle of Galatians is to defend against apostate teachers who claimed to be Christians. These teachers came after him and contorted the truth Paul had taught the young church that he began in Galatia. If you read Galatians you’ll see that Paul calls out the Galatian false teachers for their legalism. The false teachers in Galatia were going around teaching the Gentiles that in order to be saved, they had to be circumcised. They were twisting Scripture to make it say that salvation was partly Christ’s work, and partly the act of circumcision. So Paul says this:

Galatians 1:6-10
I am astonished that you are so quickly deserting him who called you in the grace of Christ and are turning to a different gospel— not that there is another one, but there are some who trouble you and want to distort the gospel of Christ. But even if we or an angel from heaven should preach to you a gospel contrary to the one we preached to you, let him be accursed. As we have said before, so now I say again: If anyone is preaching to you a gospel contrary to the one you received, let him be accursed.

These are strong words, especially in this namby-pamby society. When’s the last time you heard a sermon in which the preacher said of a false teacher “Let him be accursed”? And let’s just be honest here — there are a lot of teachers out there teaching a gospel contrary to what Christ and His apostles delivered. So why is Paul so uptight? Can’t he just live and let live?

Paul’s uptight because he knows that believing the wrong thing about the gospel will send you to hell. If you believe that Christ’s work on the cross is not enough, that you have to add something to it, that’s not salvation. Paul realizes that this is a matter of eternal life and eternal death. The whole church in Galatia is at stake here. Listen to him in Galatians 5:2-7 “Look: I, Paul, say to you that if you accept circumcision, Christ will be of no advantage to you. I testify again to every man who accepts circumcision that he is obligated to keep the whole law. You are severed from Christ, you who would be justified by the law; you have fallen away from grace.”

The most dangerous attacks on the church today come not from the outside, but from the inside, from those who once claimed Christ, but now have defected from the faith. They may even affirm the authority of Scripture with their lips, but yet in practice and in teaching, they deny it.

Next time we will take a more in-depth look at what the Bible says they look like. Until then, keep your mind sharp, your conscience clear, your faith grounded, and your eyes looking up.